Posted by TheSFReader at 5:36 AM No comments: Links to this post Edit : J'ai oublié de préciser que l'auteur me l'avait envoyé gracieusement.
Posted by TheSFReader at 7:25 AM No comments: Links to this post


Posted by TheSFReader at 2:00 PM No comments: Links to this post

I've had my "Ninja" time, when I liked all Ninja things, especially shuriken and other . However, I didn't know that there were still Ninjutsu practitioners, until I found out John F. Merz. From his web-page, he's a 5th level black-belt practitioner.

I've already read a few of his "Lawson" vampire stories, which I would have rated 3.5 - 4 stars, had I taken the time to do so. So now that he's published a YA Ninja story: "The Ninja Apprentice", and since it's only available at B&N and Amazon (both places where I won't buy),  I asked him if he had a an alternative selling location. He very kindly sent me the book for free. 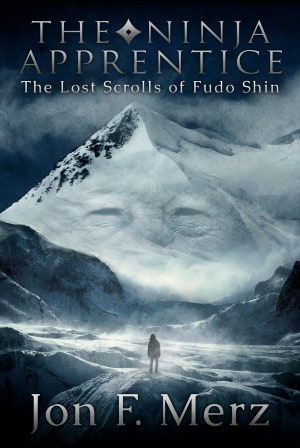 (Straight copy of the book's blurb) "Fourteen-year-old Jimmy Dolan has been shuffling from orphanage to orphanage since the sudden death of his parents, lost, and confused with a voice speaking in his head, until he is adopted by his "Aunt" V and thrown into a world where he must learn to fight to survive.

On the run from an evil industrialist known as Kotogawa and his band of assassins, Jimmy flees the United States and heads to Japan where he learns that he is the last inheritor of a ninja family lineage. Tasked with finding nine sacred relics stolen from his family, Jimmy must learn the ways of the ancient  Matsuda-ryu ninja warriors, recover the relics and battle against Kotogawa, whose hatred for Jimmy's family runs back hundreds of years.

Only then will Jimmy be able to reclaim the honor of the Matsuda-ryu Ninja and become the head of his family. "

OK, I'll go straight to the point : the book was FUN, with plenty of action, some "teenager's romance", wonders and discovery... and a few chunks of Ninja techniques added to the mix. Easy to read, no great questions or interrogations, male young adults are clearly it's target, and the book hits it perfectly.

The actions scene are all quite detailed, with of course some martial arts involved, and even if I find them a little bit too frequent, I'm sure it'll please all the younger readers.

If that were not sufficient, the author has started a website which seems promising, if quite empty for the moment,  with some space for demonstration videos.

If I were a YA, I'd definitely rate it 5 stars, but I'm not anymore, so 4 stars will prove to be sufficient. I'll most probably also read the follow-ups (if I can them legally and not from Amazon too).

Posted by TheSFReader at 11:38 AM No comments: Links to this post

Epub Lightweight Content Protection : Can anyone tell me why it would be a good idea ?

Coming back from a tiring, but great family quality time 3 days stay in London, I just found out about EPUB Lightweight Content Protection, a proposal made to IDPF (holders of the EPUB specifications) by GiantSteps Media Techlology Strategies.

I'll let you read the proposal, before trying an explain a few of my objections to such a "DRM" scheme.

Basically, LCP (Lightweight Content Protection) is a "protection scheme" that sits on an intermediate level between watermarks and full scale DRMs. It has the retailer decide on a password, for each file, (or letting the user choose a password, but that's at HIS discretion), and using this password as seed of the key to encrypt the file.

I must admit that it has a few good sides : server-less and device agnostic/independent, it does stand a little bit better the test of time, no longer depending on software/hardware vendors for continuing access to content. It should also cost less on infrastructure and runtime service for distribution, disminishing the retailer's cost of DRM solutions.

However, from my point of view, here does the list stop. Let's start with drawbacks.

First, it's DRMs. The scheme is specifically designed to "take advantage of anticircumvention law, which is enacted in many countries including signatories to the Anti-Counterfeiting Trade Agreement (ACTA)." So, it penalizes customers who would want to bypass it to use their rights and license according to their needs.

Secondly, Password management :
When buying from multiple retailers, the reader will have to remember multiple passwords, even more so if  a retailer does not use the same password for distinct files.  Additionally,  it is proposed to ease the user's reading by having the devices "store" the key so that the user doesn't have to memorize the password. In that case, if he forgets the key (more likely since may not even have to type it once), he won't be able to transfer it to even one other device ! The file will be effectively locked to that single device !

Third : Paying : "The resulting EPUB LCP specifications, implementation, and related information would likely be published under licensing regimes. That is, content distributors and reading system suppliers would need to execute separate agreements with IDPF to obtain permission to use EPUB LCP and access to the specifications and reference implementation(s). Use of the technology would be expected to be charged on a cost recovery basis."

That one I find SO great !! I may be having a quite tortured mind, but here, the reading part of my cortex translates it to : "See, there is that Pesky Adobe DRM, which costs all a lot of money, without sharing anything with you ! But if you replaced them with US, you'd get part of the money..."

What of Open Source implementations ? Nope.

Fourth : Effect : None : even if widespread, "one step cracks", which are THE proposal's targets will keep on, maybe hiding under some other applications, or more likely integrating in them...

So NOPE, that's not one I'll put my approval stamp on.

If you have objections, either to what I wrote, or other points in the proposal, this post's comments seem a good place to put them ;)
Posted by TheSFReader at 5:31 AM 2 comments: Links to this post

Posted by TheSFReader at 12:23 PM 8 comments: Links to this post

Posted by TheSFReader at 12:24 PM 2 comments: Links to this post

Posted by TheSFReader at 12:34 PM 4 comments: Links to this post

I downloaded from Smashwords some time ago The Emperor's Edge by Lindsay Buroker, if I remember correctly based on it's low price (free), and good reviews. At the same time, on twitter, I've been following a certain @GoblinWriter, whose blog post I found quite interesting. While The Emperor's Edge had been sitting on my ereader without being read, as soon as I found out that @GoblinWriter was indeed Lindsay Buroker, I started the read. 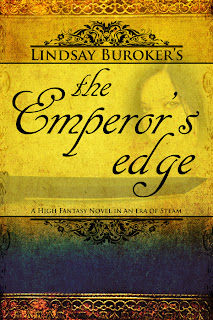 And glad was I, to have opened the book. The story is quite simple : Amaranthe Lokdon, a bottom level law enforcer (cop), and female at that, is sent to kill Sicarius the Assassin. While following her mission, she stumbles upon a scheme against the emperor. And just like that, finds herself outlawed. Saving the emperor will prove a difficult challenge to her and the team of ruffians she assembles...

The story is well written, with lots of witty and humorous situations and dialogues. Action doesn't miss either.
The gallery of characters is well depicted, and I had great pleasure getting to know them and see their by-plays. The setting, more "late Renaissance" than Steampunk,  is interesting too, with some magic to boot.

All in all, a good book, clearly not (for me) worth 5 stars, but well worth not only the time reading, but also buying the three follow-up books ($5 each).

4 good stars for this ebook. Gladly.

Posted by TheSFReader at 12:31 PM No comments: Links to this post

(edit : La suite est dispo : http://readingandraytracing.blogspot.fr/2012/09/le-prix-des-livres-2.html )
Posted by TheSFReader at 1:49 AM 2 comments: Links to this post

Email ThisBlogThis!Share to TwitterShare to FacebookShare to Pinterest
Labels: PrixDesEbooks

Foreword by TheSFReader : Posted on my blog with Kristin's knowledge. This is a copy of the copy she did on one of her "other" websites after her main one went down. And this second website ALSO lost the message...

Welcome to one of my other websites. This one is for my mystery persona Paladin, from my Spade/Paladin short stories. She has a website in the stories, and I thought it would be cool to have the website online. It’s currently the least active of my sites, so I figured it was perfect for what I needed today.
Someone hacked my website. Ye Olde Website Guru and I are repairing the damage but it will take some time. The hacker timed the hack to coincide with the posting of my Business Rusch column. Since the hack happened 12 hours after I originally posted the column, I’m assuming that the hacker doesn’t like what I wrote, and is trying to shut me down. Aaaaah. Poor hacker. Can’t argue on logic, merits, or with words, so must use brute force to make his/her/its point. Poor thing.
Since someone didn’t want you to see this post, I figure I’d better get it up ASAP. Obviously there’s something here someone objects to–which makes it a bit more valuable than usual.
Here’s the post, which I am reloading from my word file, so that I don’t embed any malicious code here. I’m even leaving off the atrocious artwork (which we’re redesigning) just to make sure nothing got corrupted from there.
The post directs you to a few links from my website. Obviously, those are inactive at the moment. Sorry about that. I hope you get something out of this post.
I’m also shutting off comments here, just to prevent another short-term hack. Also, I don’t want to transfer them over. If you have comments, send them via e-mail and when the site comes back up, I’ll post them. Mark them “comment” in the header of the e-mail. Thanks!

Z14 : Over the top Sci-Fi, "Mars Attack " like humour.
Posted by TheSFReader at 5:54 AM No comments: Links to this post

Micro-Lecture : Book of Deacon (and follow-ups) by Joseph Lallo

The Book of Deacon  : 4 stars (free)
The Great Convergence : 3 stars
The Battle of Verril  : 3 stars


Classical Fantasy
First one was promising, the two others are a little bit too "high powered" for me.
Some of the characters were great.


Posted by TheSFReader at 5:51 AM No comments: Links to this post