Guest post : 3 Barriers to Ebooks on the International Market by Tara Maya

Among all the task she set on her plate for November (a NaNoWriMo fiction, writing a ""Writer's Guide" book to NaNoWriMo, a blog tour for the new episode of her Unfinished Songs series), Tara Maya  also took the time to explain in this post her view on the international Ebook Market, as seen by a self-publishing author.

Since our first exchange, where I explained her my view, as a French man, on the same subject -- was it only two years ago ? -- much has changed. Self-publishing got some kind of approval stamp in the US, and ereaders/ebooks finally got some traction in France. Still, there is still a long way to go, before the situation stabilizes.

So, let's read what Tara says on the subject of International EBook market, and discuss it afterwards, okay ?


3 Barriers to Ebooks on the International Market


There are three important barriers to selling ebooks on an open international market.

As far as your computer is concerned, there should be no international borders. The internet is global, but there are connectivity issues for some countries. The United States has the greatest penetration of ereaders, with the UK about a year behind, and other countries behind that.

Eventually, however, most countries will probably make the same leap from paper to ereaders. Third World countries where paper books are expensive may leapfrog directly to ereaders in the long term. Penetration of the ebook technology impacts sales in the short term, but is it a good idea to sell international right (while keeping US or UK rights)? Of course, this will depend on the author, but in the long term, authors should assume that the entire global market will switch mainly to ebooks.

Now, in theory, indie sellers on Amazon, Smashwords, Kobo and other international venders, can opt to sell their books worldwide in one swoop. Yay!

Unfortunately, the laws of the various states still impede free global commerce. Many states have protectionist laws, which apply both to merchandise in general, and—unfortunately—ebooks in particular. A number of countries have prejudicial taxes levied against ebooks (but not paperbacks) or against international venders (to support government-favored businesses).

A more serious problem in some nations (such as China or Iran) is censorship. Not long ago, for instance, China passed a bizarre law forbidding time travel as a literary device in fiction. While the recent Star Trek movie has made me sympathetic to this urge, it’s obvious that such laws are extremely hostile to both an open market and the flowering of the creative arts.

Even if technological penetration proceeded evenly and if there were no protectionist or censorship laws imposed by nation states, a huge barrier remains from the point of view of an author selling ebooks internationally. This is the oldest barrier to intellectual cooperation of them all, the language barrier.

Writers using English have access to the largest and most progressive ebook market, and therefore are going to be most tempted to ignore other markets. Writers in Lithuanian are more likely to pursue translation.

There are three possible solutions to the translation problem. One is better translation software, but this seems remote at the moment. Present generation software translators do not even suffice to translate email legibly, never mind literature.

The other is a more accessible service market of translators. Right now most qualified translators will not work on spec, and the cost of their services is well beyond what indies can afford.

One third option would be if a large company such as Amazon, Google, Kobo or some new player, were to have their own team of translators (perhaps aided by software to make their work economically practical) who would offer to translate books sold through their sites. They could vastly increase the number of books they could offer to international customers, and by keeping translators on salary, decrease the risk to translators of translating less popular works.

Meanwhile, any author who can make their book available in languages like French, Japanese or German can take advantage of the smaller pool of competitors.
Posted by TheSFReader at 4:25 AM No comments:

I'v read a few weeks ago two books by Jane Fancher : 'NetWalkers "Partners" and "Of Mentors and Mimetrons" (also available as an omnibus), directly sold (without DRMs of course) from the "Closed-Circle" (follow the link ;-) ). 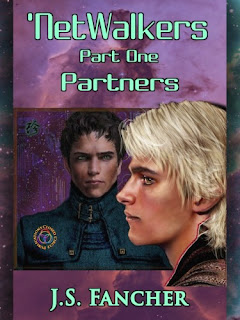 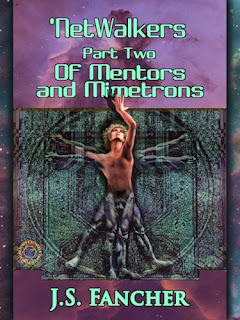 You don't know Jane Fancher ? She's a close friend and partner of C.J.Cherryh's. And if you don't know C.J. Cherryh, she's one of my favorite -- and Hugo-winning but that's not that important-- science-fiction writers.

And when I say partner, I guess it could be known that they work in close relationship, one doing the editing of the other's work (and the other way of course). From that point, I guess it's no surprise I like Jane Fancher's work almost as much as CJ's.

While the whole universe set by Jane Fancher is totally different to those of C.J. Cherryh, we find some common themes and preoccupations (Solitude, trust, education, responsibility... ). Just like the two sides of a coin, some of the problems set aside (but not left forgotten) by one, are addressed by the other, and I find in 'NetWalkers a real resonnance with Cyteen, a book I've read and re-read since my first discovery when I was a young adult.

I won't say more than that, except that if you like C.J. Cherry's works, you'll most likely like these books, as I did. An easy 4 stars for both of them

Posted by TheSFReader at 9:03 AM No comments:

Posted by TheSFReader at 12:43 AM No comments:

This english comics seems quite close to what self-publisher's life can be ...


Posted by TheSFReader at 12:37 AM No comments:

The first comment on this blog was by Tara Maya, more than a year and a half ago. I seem to remember I'd discovered her in the comments on Joe Konrath's blogs, was interested by what she said, and read the first of her books : "The Unfinished Song : Initiate" (Free).
While not perfect, Initiate was one of the books that convinced me that, indeed, good to great books could be found from self-published authors.
Last month, Tara published the 5th book of here Unfinished Song Series : Wing. As she was looking for hosts for her blog tour, I proposed she stop by as a guest on mine.
In her blog tour, for 12 days, each host will post an excerpt of Wing on his blog. What follows is my excerpt, and I must say that I'm really gratefull I got that part, since it fully reflects my feelings about her series, as expressed on my review.
Additionally, and if all goes well, I should have an other post from Tara Maya (you can follow her on her blog at taramayastales.blogspot.com/) before the end of the month.

But for now, I'll leave you with Dindi and Umbral